Wednesday Lou Dobbs announced on the air that he resigned from CNN. A surprise announcement was made after a recent history of controversial comments on immigration. 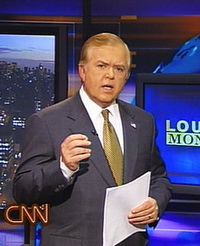 Dobbs said that CNN/U.S. President Jon Klein released him from his contract so he could pursue other opportunities. He did not offer specifics but suggested that he is seeking a role in which he will not be constrained from speaking freely.

"Over the past six months, it's become increasingly clear that strong winds of change have begun buffeting this country and affecting all of us," Dobbs said as he opened his daily program. "And some leaders in media, politics and business have been urging me to go beyond my role here at CNN and to engage in constructive problem-solving, as well as to contribute positively to a better understanding of the great issues of our day. And to continue to do so in the most honest and direct language possible," The Los Angeles Times reports.

It was also reported, the abrupt announcement caught even some of his closest staff members by surprise. They were told about the decision only hours before Mr. Dobbs’s 7 p.m. program. CNN, a unit of Time Warner, said it would name a replacement for Mr. Dobbs on Thursday morning.

Mr. Klein said in a statement that “Lou has now decided to carry the banner of advocacy journalism elsewhere.”

“All of us will miss his appetite for big ideas, the megawatt smile and larger than life presence he brought to our newsroom,” he said.

In the meantime, in recent years, the renamed "Lou Dobbs Tonight" has served as a forum for his strong and often controversial opinions, sometimes to the discomfort of the correspondents being interviewed. Dobbs drew fire earlier this year by urging President Obama to do more to prove that he was born in Hawaii, lending credence to unsubstantiated claims by the so-called "birthers."

The Southern Poverty Law Center asked CNN in July to fire Dobbs over what it called his "racist conspiracy theories." And it put Klein in an uncomfortable position, simultaneously insisting in a memo to his staff that the story about the president's birth certificate was "dead" and telling the Los Angeles Times that he trusted Dobbs to exercise his judgment on whether to keep pursuing it.

Dobbs, whose 7 p.m. program had introduced him as "Mr. Independent," said he is "weighing his options" about his next move, The Washington Post reports.