Tension is growing on the Korean Peninsula. Navy ships of the two Koreas exchanged unfriendly fire Tuesday along their disputed western sea border, according to South Korean military officers' reports. 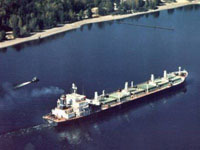 A South Korean warship shot at a North Korean navy ship that crossed the disputed western sea border on Tuesday morning and the North's ship shot back, said an officer at the Seoul's Joint Chiefs of Staff.

Both officers spoke on condition of anonymity, citing department policy.

Navies of the two Koreas fought deadly skirmishes along the western sea border in 1999 and 2002. The clash in 2002 left six South Korean soldiers dead and others wounded.

The two Koreas have yet to agree on their sea border more than 50 years after the end of their 1950-53 civil war, which ended in an armistice and not a permanent peace treaty.

Instead, they rely on a line that the then-commander of U.N. forces, which fought for the South, drew unilaterally at the end of the conflict.

North Korea last month accused South Korean warships of broaching its territory in waters off the west coast and warned of a clash in the zone, which is a rich crab fishing area.

The latest conflict comes amid international tensions over North Korea's nuclear weapons program and expectations that Pyongyang and the United States may soon engage in direct talks.

Meanwhile, there were no signs of tension along the heavily fortified land border separating the two Koreas. South Korea's Joint Chiefs of Staff said that were no unusual troop movements on the North Korean side of the land border.

Associated Press  has contributed to the report.