Venezuela Is Up In Arm

President Hugo Chavez prefers to be ready for any attack, especially if it could be incited by U.S. government. 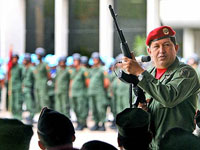 Venezuela Is Up In Arm

He ordered Venezuela's military on Sunday to prepare for a possible armed conflict with Colombia. "The best way to avoid war is preparing for it," Chavez told military officers standing at attention during his weekly television and radio program.

Chavez told his supporters that President Barack Obama holds sway over Colombia's government, and he cautioned the U.S. leader against using his allies in Bogota to mount a military offensive against Venezuela. "Don't make a mistake, Mr. Obama, by ordering an attack against Venezuela by way of Colombia," he said.

The former paratroop commander voiced concern over an agreement between Bogota and Washington giving the American military personnel more access to Colombia's military bases through a 10-year lease agreement.

Chavez also reiterated what he said is his fear that U.S. soldiers could use the bases as launching pads for an attack on his country to seize control of its immense oil reserves.

On Thursday, Venezuela sent 15,000 soldiers to the border with Colombia, saying the military buildup was necessary to increase security along the border, combat drug trafficking and root out paramilitary groups.

The deployment follows a series of shootings and slayings that have heightened tensions between the two countries, according to the Associated Press'  report.