Berlin Wall Was Breached 20 Years Ago

The Berlin Wall, which fell 20 years ago, was twenty-seven miles of the new barrier zig-zagged north to south, along the urban boundary that separated West and East Berlin. 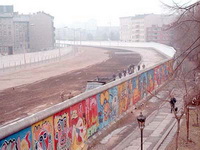 Berlin Wall Was Breached 20 Years Ago

All states have frontiers. East Germany, aka the German Democratic Republic, became a frontier that had a state. When the frontier dissolved, the state followed less than a year later.

On August 13, 1961, after consultation with their Soviet patrons, the GDR authorities laid down 97 miles of barbed wire around West Berlin – an island of western Allied sovereignty and West German constitutional liberty 110 miles within East Germany – to sever it from the Communist-controlled territory that surrounded it, Telegraph.co.uk reports.

News agencies also report, East Germans may have arrived in West Berlin hours before history records, according to an elderly checkpoint commander who has disputed an ex-comrade's claim to be the first raise the barriers along the Berlin Wall in November 1989.

The rival version of events on November 9 has cast doubt on the official history of one of the most celebrated decisions of the century, as Berliners prepare to mark the 20th anniversary of the breaching of the wall with a "Festival of Freedom" this weekend.

Until recent weeks, Harald Jaeger, a Stasi officer at Bornholmer Strasse in north Berlin, held the undisputed mantle of the man who peacefully breached the Berlin Wall. But now Heinz Schafer, who was a colonel in the East German army in 1989, has declared that he was the first to open the barriers, at Waltersdorf in the far south of the city. Col Schafer, a 78 year-old who lives in a bleak suburb not far from the former crossing, only put forward his account in a talk to schoolgirls earlier this year.

"As soon as I saw the announcement on television [that travel restrictions for East Germans had been lifted], I put on my uniform and returned to the station," he said. "People had already gathered between the fence and the barrier and were demanding the right to cross. I had certain things to do – for example, we had to take the ammunition out of the self-shooting guns to make them safe, Telegraph.co.uk reports.

It was aslo reported, by Oct. 23, 250,000 East Germans were marching in Leipzig. On Nov. 9, after East German spokesman Günter Schabowski ineptly and incorrectly answered a reporter's question by stating that a new freedom-to-travel policy was operative immediately, thousands headed to the Berlin Wall, which then peaceably "fell." But bloodshed would still follow in Romania. In December, Romanian president Nicolae Ceausescu ordered his troops to fire on demonstrators in Timisoara, triggering a series of violent events (1,104 Romanians were killed, according to official statistics) that led to the trial and execution of Ceausescu and his wife on Dec. 25.

For perspective, it's worth remembering that Germany didn't reunite until the following year. The Soviet Union's dissolution came only at the end of 1991. And China's Communist leaders, mindful of events in Eastern Europe, brutally cracked down on the Tiananmen Square street protests in June 1989, killing hundreds or thousands to keep alive the regime that persists today.

Still, short-term judgments on 1989, at least in the West, were triumphalist. Liberal democracy and capitalism defeated communism. People power defeated dictatorship. Among the stated causes were Gorbachev's commitment to glasnost and perestroika and rejection of force; globalization's opening of Western prosperity to Eastern eyes; the bravery of reform Communists in Hungary; a vibrant Polish civil society, further galvanized by a Polish pope; Ronald Reagan's tough-guy tactics; and fear of a Tiananmen-type massacre in Europe, The Los Angeles Times reports.