Friday Prime Minister Gordon Brown said that the government in Kabul would forfeit its right to international support against the Taliban insurgency if it failed to root out corruption. 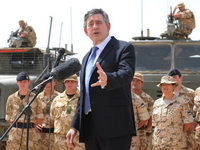 “Sadly, the government of Afghanistan had become a byword for corruption,” Mr. Brown said in a speech to defense experts. “And I am not prepared to put the lives of British men and women in harm’s way for a government that does not stand up against corruption.”

His words were interpreted by some analysts as the toughest by a Western leader since Mr. Karzai was declared the winner earlier this week of Afghanistan’s flawed elections amid accusations of malpractice at the ballot box and corruption in his government.

The timing of Mr. Brown’s warning was particularly significant, with the Obama administration under domestic and international pressure to decide whether to commit up to 40,000 more American troops to Afghanistan at a time when the international appetite for the conflict seems to be receding, The New York Times reports.

It was also reported, Gordon Brown spoke days after five British soldiers were killed in Helmand by a police officer who was being trained by UK forces.

The future of the UK mission in Afghanistan is being debated in the House of Lords and by military figures.

BBC News quoted Colonel Richard Kemp, former commander, as saying, "In order to turn it around we just don't need to explain position strongly as the prime minister is beginning to do now, we also need to do something to turn the situation around, to see real strong results in Afghanistan, which we really haven't seen to date. That can only be achieved by additional forces and additional resources being put into the campaign," BBC News rerports.

News agenci\es also report, Brown said he has told Karzai to make a "contract with the Afghan people" against which they can measure his success. Brown said he also proposed that Karzai enact a new anti-corruption law that allows for investigation and prosecution.

"Good governance is more, of course, than the absence of corruption -- it is about having properly qualified men and women in the key jobs," Brown said. "The world will be monitoring the new government's appointments (of) cabinet ministers and provincial governors to ensure that they are based on merit. Cronies and warlords should have no place in the future of a democratic Afghanistan."

Still, Brown said Britain's presence in Afghanistan is justified because it focuses on strengthening local authorities to enable them to fight the Taliban and al Qaeda, CNN International reports.