Congress to Vote on Healthcare Reform: Democrats Are Looking for Support

As a close vote looming in the House of Representatives, President Barack Obama's push for healthcare reform was boosted on Thursday by the support of powerful lobbies representing doctors and seniors. 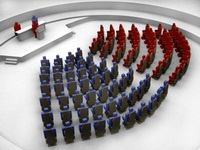 Congress to Vote on Healthcare Reform: Democrats Are Looking for Support

House Democratic leaders struggled to round up enough party moderates to reach the 218 votes needed to pass Obama's top domestic priority ahead of a planned Saturday vote.

Obama will visit the Capitol on Friday to make a personal plea for support. He said endorsements from the American Medical Association representing doctors, and AARP, the lobbying group for older Americans, were a powerful argument, The New York Times reports.

"We are right on the brink," Pelosi said. "We have a historic opportunity for us to again provide quality health care for all Americans. It is something that many of us have worked our whole political lifetimes on," San Francisco Chronicle reports.

The illegal immigration issue is emerging as the biggest threat to passing healthcare reform in the House. Congressional Hispanics have threatened to vote against the bill because of a last-minute threat from within the Democratic Caucus to bolster the House bills immigration restrictions to match those included in the Senate Finance bill. CHC members met with the president at the White House and insisted he drop his opposition to illegal immigrants being able to buy insurance in the exchange.

In a step that reflected deep partisan divisions in the Senate over the issue of global warming, Democrats on the Environment and Public Works Committee pushed through a climate bill on Thursday without any debate or participation by Republicans. The measure passed by an 11-to-1 vote with the support of all the Democratic committee members except Senator Max Baucus of Montana. The seven Republicans boycotted the committee meetings this week, saying they had not had sufficient time to study the bill... The move suggests that President Obama and Democratic supporters of the bill will have serious problems assembling the votes needed to enact it when it comes to the Senate floor, probably not before next year, msnbc.com reports.