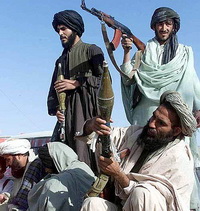 The killer – identified only as a policeman called Gulbadin – was back under Taliban protection, the source said.

British and Afghan commanders were undertaking an urgent investigation into the circumstances of the attack.

Meanwhile, Gordon Brown is to make what advisers say will be a major speech on Afghanistan on Friday, amid growing calls for a rethink of UK strategy.

The deaths of five British soldiers at the hands of an Afghan policeman have raised questions about security and the UK's role in training Afghan personnel.

But Armed Forces Minister Bill Rammell said there was "no credible alternative" to the present strategy, BBC News reports.

It was also reported, Prime Minister Gordon Brown told parliament members Wednesday that "while we are assembling evidence, the Taliban has claimed responsibility for this incident."

Brown stressed that training of local police officers remained an essential element of the strategy in Afghanistan and would not be stopped because it was "what the Taliban fears most."

"They (the soldiers) fought to make Afghanistan more secure," Brown said, "but above all to make Britain safer from the terrorism and extremism which continue to threaten us from the border areas of Afghanistan and Pakistan."

The five deaths were the highest number of British soldiers killed in a single incident since the U.S.-led invasion of Afghanistan in 2001. The British death toll in Afghanistan now stands at 229, Xinhua reports.