Though supporters of Abdullah Abdullah are disappointed at ultimate presidential elections' results, they have heeded their candidate's call to reject a violent response. 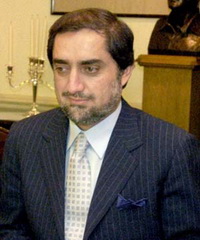 In the northern city of Mazar-e-Sharif, with its famous blue mosque and a mixed population of Tajiks, Uzbeks and Pashtuns, Dr Abdullah secured more votes than his rival.

While Hamid Karzai's supporters have been celebrating, among Abdullah supporters there is a mood of discontent.

The governor of Balkh province of which Mazar is the capital, Atta Mohammad Noor, has rejected the election commission's decision to hand victory to Mr Karzai outright, BBC News reports.

Meanwhile, the United States wants Afghan President Hamid Karzai to arrest and prosecute corrupt government officials and take other concrete measures to shore up his legitimacy, the top U.S. military officer said on Wednesday, suggesting such steps were key to a troop increase.

Washington believes a successful counterinsurgency strategy hinges on winning Afghan public support for the government in Kabul and sidelining the Taliban.

But Admiral Mike Mullen, chairman of the U.S. military's Joint Chiefs of Staff, said the re-elected president's legitimacy among his people was "at best, in question right now and, at worst, doesn't exist."

Describing Washington as "extremely concerned" by rampant corruption in Afghanistan and Karzai's standing in his country, Mullen said a housecleaning was needed at all levels of government and should be spearheaded by the Afghan president, Reuters reports.

It was also reported, the discovery of widespread fraud in the first round on August 20 resulted in Karzai's share of the vote falling below the 50 per cent threshold needed to avoid a runoff.

Abdullah cited the government's refusal to accept his demands for changes to the IEC for his decision to boycott the runoff.

Al Jazeera's James Bays, reporting from the capital, Kabul, said Abdullah has shown he is not going to accept losing the election.

"He said the Independent Election Commission proved itself not independent throughout this process," our correspondent reported, Aljazeera.net reports.