In Maine gay-rights advocates suffered a crushing loss. Tuesday voters decided to reject the state’s new law allowing gays and lesbians to wed, setting back a movement that had made remarkable progress nationally this year. 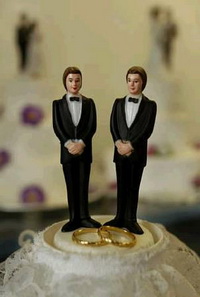 Maine became the 31st state to block same-sex marriage through a public referendum, a result that will force supporters to rethink their national strategy at a crucial time for the movement. With 84 percent of precincts reporting early Wednesday, the repeal proposal had 53 percent of the vote, even though polls had indicated the race was a dead heat.

This year three other states — Iowa, New Hampshire and Vermont — joined Massachusetts and Connecticut in allowing same-sex marriage, but only through court rulings and legislative action. Maine, with its libertarian leanings, had seemed to offer an excellent chance of reversing the long national trend of voters rejecting marriage equality at the ballot box, The New York Times reports.

It was also reported, Maine currently grants domestic-partnership status to same-sex couples, along with about seven other states. The state's legislature voted in May to allow gays to marry each other, but an opposition petition campaign led the measure's implementation to be delayed and submitted to a popular referendum Tuesday.

In Washington state, voters appeared poised to approve the expansion of rights granted to gay couples under the state's domestic-partnership registry.

Earlier this year, the state passed a law to expand domestic partnerships to have the same rights as marriages under state law. Early returns showed 51% approving of the expanded status, compared with 49% who voted to reduce the rights of same-sex domestic partners, The Wall Street Journal reports.

News agencies also report, Marc Mutty, campaign manager for Stand for Marriage Maine which opposed gay marriages, claimed victory at a rally in Portland just after midnight. "We've struggled, we've worked against tremendous odds, as we've all known," he said. "We prevailed because the people of Maine, the silent majority, the folks back home spoke with their vote tonight."

Gay-rights activists had hoped Maine voters -- known for thier moderate, independent-minded views -- would have been the first to endorse same-sex marriage in a statewide ballot. In the five states performing gay marriages – Iowa, Connecticut, Vermont, New Hampshire and Massachusetts -- the practice took effect after legislation or court order. New York and the District of Columbia recognize same-sex marriages performed in other states, but do not grant them.

"We're in this for the long haul. For next week, and next month, and next year until all Maine families are treated equally. Because in the end, this has always been about love and family and that will always be something worth fighting for," said Jesse Connolly of the pro-gay-marriage group Protect Maine Equality.

Sources inside the Protect Maine Equality campaign tell ABC News the referendum is likely headed for a statewide recount. After the Maine secretary of state certifies the results, the campaign will have to pay a nominal fee to request the count, which could take at least several weeks, ABC News reports.