Pregnant women and other people belonging to high risk groups should be vaccinated against the H1N1 swine flu virus as the cold weather is coming to the northern hemisphere, the World Health Organisation (WHO) said on Tuesday. 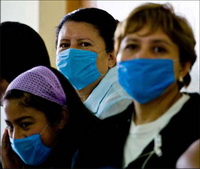 It voiced concern that some vulnerable people are shying away from the pandemic vaccine, which the WHO stressed had not caused any unusual side effects in hundreds of thousands of people to have received it worldwide so far.

"Certainly the fact that the vaccine isn't being used by those who would have access to it and who would be in priority risk groups is of concern, yes," WHO spokesman Gregory Hartl told a news briefing.

At least 5,712 people have died from the swine flu virus, according to the United Nations agency. Health workers, pregnant women and people with conditions such as asthma are deemed at greatest risk and should be top priority for getting the shot, Reuters reports.

It was also reported, the Canadian government, facing public impatience over the pace of vaccinations for the H1N1 flu, signaled on Tuesday that it might no longer sole-source vaccines for future pandemics.

"As we move forward, just as we have more than one supplier for seasonal (flu vaccine), we'll probably be looking at that as an option (for pandemic vaccines) into the future," Chief Public Health Officer Dr. David Butler-Jones told the Toronto Star newspaper. A spokeswoman confirmed the gist of his remarks.

Canada now relies only on GlaxoSmithKline Plc for its H1N1 vaccine. Though Canada has received more than three times as many doses, on a per capita basis, than the United States, huge, hours-long line-ups have formed in big cities to get the shots.

GlaxoSmithKline produced 2 million vaccines a week for three weeks but this week is cutting back to about half a million because of the requirement that it produce a special variety for pregnant woman, Reuters reports.

In the meantime, in Alabama state health officer Don Williamson also urged school districts not to close due to the H1N1 virus. This statement was written on the Centers for Disease Control website regarding the closure of school:

"The new guidance will recommend schools cease closing with recognized cases if H1N1 flu," Sebelius said at a news conference. "We hope this will alleviate some of the burdens on parents and workers. But keeping children safe and sound took the top priority until we knew more about this disease."

Ever since these new guidelines were released by the CDC not one school district in the state of Alabama has closed due to the H1N1.

The CDC did say that students who are exhibiting flu-like symptoms should stay out of school and see a family doctor if the symptoms persist. In the absolute worse case does will the CDC recomend that school districts completely shut down, Associated Content reports.