Afghanistan's president Hamid Karzai welcomed his re-election by default Tuesday and reached out to opponents. Karzai promised to create an inclusive government. 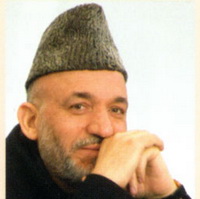 President Hamid Karzai did not spell out how he would institute reforms or mention whether he is willing to make concessions to his opponents.

Karzai spoke a day after being declared victor of an election so marred by fraud that it took two and a half months to resolve. Karzai's main opponent, Abdullah Abdullah, said when he dropped out of a planned runoff that he was withdrawing because it could not be free or fair.

Karzai said he wants people from every part of the country in his government, including political opponents and Taliban who are ready to cooperate with the administration. But he never mentioned Abdullah by name.

It was also reported, to win a second term, Karzai allied himself with several regional strongmen such as Fahim whose presence in the government appears to limit chances for a real anti-corruption drive, said Ahmed Nader Nadery, chairman of the Free and Fair Election Foundation of Afghanistan.

Karzai’s vow came after Obama said he had called the Afghan leader and urged “a much more serious effort to eradicate corruption.” Karzai “assured me that he understood the importance of this moment,” Obama told reporters in Washington yesterday. “But as I indicated to him, proof is not going to be in words, it’s going to be in deeds.”

The role in Karzai’s government of Fahim may become a major issue, according to Hillary Mann Leverett, a National Security Council director for Afghan affairs in the George W. Bush administration. Fahim is “a human-rights-abusing, drug- trafficking warlord,” Leverett wrote in an August essay in Foreign Policy magazine, Bloomberg reports.

In the meantime, while under a critical eye from the West, Karzai still has plenty of support, especially in the Pashtun-dominated south and east. Hundreds took to the streets in celebration in the western city of Herat on Monday.

But not everyone in the capital was happy with his return.

"Whatever he has done during the last seven or eight years, it will be the same again," Kabul resident Haji Daulat told Reuters television. "So many people died during his term, and prices went up for everything."

Karzai has ruled since U.S.-backed Afghan forces toppled the Taliban in 2001.

"The credibility of the Karzai government is not going to be simply decided by this election, it will now be decided by the actions the president takes over the coming days and weeks," said a Kabul-based Western official who asked not to be named, Reuters report.