People Drown Near Australia Fleeing from Violence in Their Native Countries

A boat carrying around 40 people has sunk off the remote Cocos Islands in the Indian Ocean, with possibly only 15 people rescued, Australian officials and local media said on Monday. 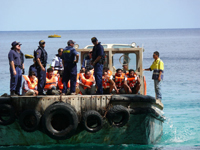 People Drown Near Australia Fleeing from Violence in Their Native Countries

Australia launched a rescue operation after receiving a distress signal on Sunday night from a ship 350 nautical miles northwest of the Cocos Islands, an Australian territory.

"The Rescue Coordination Centre reports that the vessel has sunk and up to 40 people may have been in the water at one stage," a spokesman for Home Affairs Minister Brendan O'Connor told local media.

At least 15 people had been rescued by a merchant ship in the area, which reported that the ship had sunk by the time it arrived on the scene, said Australian Broadcasting Corp radio.

It was unclear where the sunken ship was heading or whether it was carrying asylum seekers.

More than 1,600 boatpeople have arrived off Australia's northwest coast this year, mainly people fleeing violence in Afghanistan and Sri Lanka.

The numbers are a drop in the ocean compared with the tens of thousands of asylum seekers sailing across the Mediterranean to Europe each year, according to Reuters  report.