Ukraine Suffers From Political Games More Than From Pandemic Disease

Ukraine is in a panic about so-called swine flu, with officials closing schools, imposing travel restrictions and limiting public gatherings. But in fact in the country many are almost sure that politics make a fuss just to gain more election points. 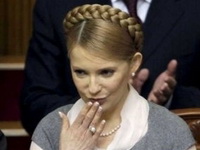 Ukraine Suffers From Political Games More Than From Pandemic Disease

The World Health Organization has found no evidence that Ukraine's outbreak is particularly severe, leading some political analysts to say Ukraine's politicians are using the swine flu scare to earn political points ahead of the country's presidential election in January.

The health minister, Vasyl Knyazevich, warned on Friday that nationwide quarantines could be imposed as the virus is spreading "extremely fast."

On Monday, his ministry said 67 people have died of flu, but it did not specify how many of deaths were related to swine flu. In any case, that is a tiny number in a country like Ukraine, which has a population of 40 million.

At the government's request, the World Health Organization has sent a team to help Ukraine deal with the outbreak.

The January election is a pivotal vote which could overturn the 2004 Orange Revolution that swept a pro-Western government to power.

Viktor Yanukovych, the Regions' Party candidate for the presidency, has not yet commented on the swine flu uproar. Yanukovych, who was beaten in 2005 by Yushchenko, is leading in the polls with a platform that emphasizes closer ties with Russia.

During the past five years of Yushchenko's presidency, relations with Moscow reached historic lows. Yushchenko's ratings have fallen to single digits in the wake of the economic crisis, which hit Ukraine hard, and years of political gridlock with Tymoshenko.
The Associated Press  has contributed to the report.