EU Presses U.S. for Openness of Plans On Climate Agreement

European Union leaders intend to receive clear  position of U.S. government on climate issue  at the meeting in Washington this week. 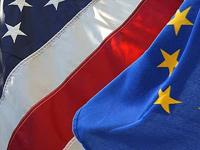 EU Presses U.S. for Openness of Plans On Climate Agreement

Reinfeldt said Monday he hopes the U.S. will make a commitment to cut greenhouse emissions and help finance poorer countries' efforts to cope with global warming.

EU leaders pledged last week to pay their "fair share" into a global fund for developing nations but failed to agree on a figure.

The last round of U.N. climate change talks before the Copenhagen conference are being held this week in Barcelona, Spain.