The U.N. secretary-general Ban Ki-moon has arrived in Kabul for talks with Afghan President Hamid Karzai and his former challenger. 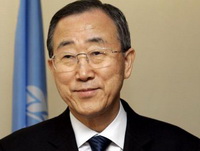 Ban Ki-moon's arrival Monday comes at a politically sensitive time, following Abdullah Abdullah's announcement that he is withdrawing from the presidential runoff vote because of concerns about fraud. His withdrawal effectively hands Mr. Karzai a re-election victory, although Afghan officials have said the November 7 vote will still go forward.

The top U.N. envoy to Afghanistan, Kai Eide, has said the election should now be brought to a conclusion in a legal and timely manner, Voice of America reports.

"The Secretary-General will also meet Dr Abdullah Abdullah and President Hamid Karzai to assure them and the Afghan people of the continuing support of the United Nations toward the development of the country and the humanitarian assistance that the U.N. provides to millions of Afghans everyday," the statement said.

A weakened Afghan government under Karzai would be a blow for U.S. President Barack Obama as he considers whether to send up to 40,000 more troops to fight a resurgent Taliban in Afghanistan.

Western officials in Kabul refused to confirm even whether they were in discussions with the IEC but privately acknowledge a run-off with Karzai as the only candidate would cast serious doubts over the credibility of his government, Reuters report.

News agencies also report, US Secretary of State Hillary Clinton said it was now up to the Afghan authorities "to decide on a way ahead that brings this electoral process to a conclusion in line with the Afghan constitution."

Following the fraud in the first round on August 20, Abdullah demanded Karzai sack the IEC's head, Azizullah Ludin, and suspend three cabinet ministers who campaigned for the incumbent.

Karzai's share of the vote in the first round fell to 49.67 percent after around a quarter of all votes were deemed fraudulent,.

Abdullah won just over 30 percent and would have had a mountain to climb to overhaul Karzai, AFP reports.