Iran's president, Mahmoud Ahmadinejad, expressed readiness to work with the West on a U.N. deal for processing nuclear fuel. Mr. Ahmandinejad spoke as Iranian representatives were giving their formal response to the U.N. deal. 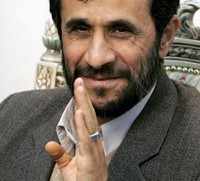 He says, "You have confronted our nation with resolutions sanctions and military actions for several years, now you want to change your behavior, we welcome change, we shake the hand that is stretched out to us honestly."

But he also told a cheering crowd in the northeastern city Mashhad, Iran would never give up what he called, "its nuclear rights," Voice of America reports.

Meanwhile, Iranian news agencies said international arms control inspectors today received Tehran's formal response to a proposal to take 2,560 pounds of its low-enriched uranium to Russia and France by year's end to be further refined and fitted for a medical reactor in the Iranian capital.

Details of the Iranian response were not immediately available. But in recent days, officials have hinted they wanted to amend the proposal, perhaps by decreasing the quantity of enriched uranium shipped abroad or stretching out the timetable.

The hard-line daily Javan reported today that the Iranians would offer to transfer the low-enriched uranium in multiple batches rather than all at once, with the medical reactor fuel transferred back to Iran soon after every batch.

The U.S., Russia and France have signed off on the original plan, praised by diplomats and security experts as a way to temporarily allay Western fears that Iran could quickly turn its enriched uranium into fuel for a bomb and serve as a possible cornerstone for future negotiations over Iran's nuclear program. A flurry of diplomatic activity has been unfolding around the nuclear issue. Today international inspectors visiting a recently disclosed uranium enrichment facility near the city of Qom returned to Vienna, a news release said. Disclosure of the plant had fueled suspicions that Iran was building a secret parallel nuclear program beyond the sight of international inspectors, The Los Angeles Times reports.

It was also reported, IAEA Director-General Mohamed ElBaradei, who mediated in the talks between Iran and the world powers, last week described the plan as “a very important confidence-building measure that can defuse the crisis that has been going on for years.”

Iran prefers to send the material abroad in stages, rather than all at once as proposed, Alaeddin Borujerdi, head of the parliamentary national security and foreign policy committee, was cited as saying on Oct. 27 by ISNA. Another option is to buy readymade reactor-grade fuel without exporting any of its own supply, he said.