The bodies of 15 US soldiers and three Drug Enforcement Agency agents were transferred to a mortuary on the base. 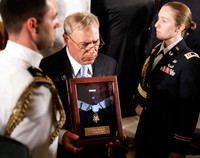 His predecessor, George W Bush, visited the families of dead troops but never received the bodies at the base, in Dover, Delaware.

Mr Bush also did not go to military funerals, telling the military newspaper Stars and Stripes three years ago that he preferred to meet families privately , BBC News reports .

It was also reported, t he administration this year lifted a ban on media coverage of the return of fallen service members. Obama was accompanied by a small pool of White House reporters who were on duty overnight.

The casualties returning overnight were the seven Army soldiers and three Drug Enforcement Administration agents killed when their MH-47 Chinook crashed at Darreh-ye-Bum, and eight soldiers killed when their Stryker personnel vehicle was struck by a roadside bomb in the Arghandab River Valley. Both incidents occurred Monday.

Obama met privately with the families of the dead at a chapel on the Delaware base around 3 a.m EDT.

Shortly afterward, a white-gloved military team of six led the president's group to a large plane on the tarmac, where they stood at attention, single file, as the team transferred the casket of Sgt. Dale Griffin from the plane to a white mortuary van , The Los Angeles Times reports .

News agenciea also report, u nder George Bush, who launched the conflict in retaliation for the terrorist 9/11 attacks, news media were barred from observing the return of fallen troops through Dover airbase.

The Pentagon said the measure, in place since the administration George Bush Sr, guarded the families' privacy, but critics claimed the government was trying to obscure the conflict's human toll.

Obama overturned the ban this year, and allowed the families to choose whether to allow media coverage . Bush spent time with grieving military families but never went to Dover , guardian.co.uk reports.