During an address to military servicemen and women in Florida, President Obama has said that he will not rush a decision on whether to send tens of thousands more troops to Afghanistan. 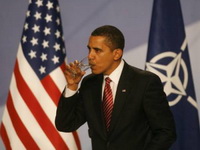 "I will never hesitate to use force to protect the American people or our vital interests, I also promise you this - and this is very important as we consider our next steps in Afghanistan," Barack Obama said at a naval air station in Jacksonville on Monday.

"I will never rush the solemn decision of sending you into harm's way ... I won't risk your lives unless it is absolutely necessary, and if it is necessary, we will back you up.

Obama's address came hours after he led a sixth meeting of a bipartisan war council, which focused on future military strategy in Afghanistan, Aljazeera.net reports.

It was also reported, on a day when 14 U.S. servicemen and drug agents were killed in helicopter crashes in Afghanistan, the largest such toll in more than four years, momentum continued to build to send more troops to the war zone.

Sen. John F. Kerry (D-Mass.), chairman of the Senate Foreign Relations Committee, said in a Washington address that he would support a decision by President Obama to "send some additional troops" provided improvements are made in Afghan troop training and government, and civilian aid efforts are increased.

Obama, speaking to service members in Jacksonville, Fla., promised his full support for all troops he sends into battle, as he continues to review his Afghanistan strategy.

The president acknowledged the deaths of 14 Americans in a pair of helicopter crashes in Afghanistan, the largest single-day loss of life for U.S. forces since June 2005, when 16 American troops died after their helicopter was shot down by insurgents, The Los Angeles Times reports.

News agencies also report, the president’s speech at Naval Air Station Jacksonville offered few clues about where the review of his policy toward Afghanistan and Pakistan was heading. He flew here after huddling with his national security advisers at the White House in the sixth such session in the last six weeks, and the first since President Hamid Karzai of Afghanistan agreed to participate in a runoff election.

Whether Mr. Obama plans to make his decision before that vote on Nov. 7, or before the results are finalized a couple weeks later, remains uncertain. Robert Gibbs, the White House press secretary, said the decision “could come at any moment” but then added that it could still be weeks away, The New York Times reports.