Saturday President Obama declared that the swine-flu outbreak is a national emergency. This is an attempt to ease the way for doctors and health-care facilities to respond more quickly as the number of illnesses grows and vaccine deliveries are delayed. 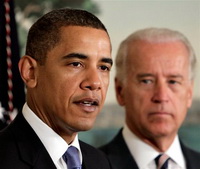 The announcement comes as criticism of the government's swine-flu vaccination campaign has grown, with parents, pregnant women and others often being frustrated in their attempts to get the shot.

The declaration, which Mr. Obama signed Friday, authorizes the administration to waive or modify certain federal requirements involving Medicare, Medicaid and health-privacy rules to speed treatment. While grim sounding, it is aimed at clearing government red tape before it can become an obstacle for health-care providers in the weeks ahead should the number of flu cases surge, a White House spokesman said.

The spokesman, Reid Cherlin, said the declaration wasn't tied to any recent developments, including delays in vaccine production. Less than half of the expected amount of vaccine has been shipped this month to public health clinics and other providers, The Wall Street Journal reports.

It was also reported, at some vaccination sites people have stood in line through the night; hundreds have been turned away. On Chicago’s North Side, Mary Kate Merna, 28, a teacher, arrived too late. “I thought I’d be a priority, being nine months pregnant,” she said. “You hear it’s a national emergency and it scares you.”

On Sunday, swine flu reached high into the sporting world, delaying a key French soccer match in Marseille. The game between rivals Paris Saint-Germain and the Olympique de Marseille was postponed after a third player on the Paris team was diagnosed with the H1N1 virus. The cancellation was announced hours before the match at the 60,000-seat Stade Velodrome.

The disease continued to spread rapidly in parts of the Northern Hemisphere, though it has slowed in much of the Southern Hemisphere. Worldwide, the swine flu has claimed nearly 5,000 lives, according to the World Health Organization. U.S. officials say more than 1,000 Americans have died because of it.

Morocco recently closed schools for the first time, when 10 students contracted the flu. Turkey reported its first fatal case of H1N1, that of a 29-year-old in Ankara. Iceland had its first swine-flu death last week. Mongolia and Rwanda reported their first cases, The New York Times reports.

Even so, she and White House officials insisted that the national emergency declaration isn't linked to current infection rates.

Instead, they said this is a precautionary move that allows HHS to waive some federal requirements for hospitals that may get overrun with swine flu victims in coming weeks and months.

"The American people shouldn't panic over this, they shouldn't be concerned over this," Lurie said. "This is just another really proactive step that we are trying to take so that everybody is prepared as they can be," ABC News reports.