Two Sudanese women were on Thursday sentenced to 20 lashes and fined for committing an act of indecency by wearing trousers, weeks after a similar case sparked worldwide controversy. 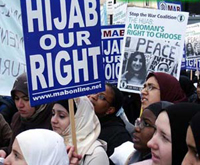 The two women were arrested at the same party as Lubna Hussein, a former journalist who was also charged with wearing trousers and publicised her case as part of a campaign against Sudan's public order laws.

Judge Hassan Mohamed Ali sentenced each woman to 20 lashes and a fine of 250 Sudanese pounds ($110) in Khartoum East court on Thursday afternoon.

The women's supporters told journalists the punishment, often carried out immediately after a conviction, was postponed after the women launched an appeal.

Hussein, who was at the court on Thursday said the latest sentencing showed her campaign still had a long way to go.

"The campaign has succeeded in showing the world that there are unfair laws against women in Sudan. But we will keep on fighting," she said.

Indecency cases are not uncommon in Sudan, where there is a cultural gap between the mostly Muslim north and the south, dominated by Christians and followers of traditional beliefs.

Many women activists complain Sudan's public order regulations are vague and give individual police officers undue latitude to determine what is decent clothing for women.

Hussein was arrested by Sudan's public order police at a Khartoum party in July with 12 other women, 10 of whom pleaded guilty to similar charges and were flogged.

Hussein was jailed in September after refusing to pay a fine for the same offence but released after a day in prison after the country's journalists' union came up with the payment.

Reuters India has contributed to the report.