Tuesday Israel's Prime Minister Benjamin Netanyahu instructed his government to draft an initiative to amend the international laws of war after the Goldstone report on its war in Gaza. 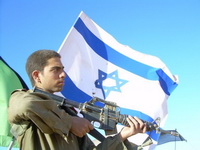 The security cabinet did not, however, discuss calls made by ministers for an internal investigation into the 22-day offensive at the turn of the year that killed some 1,400 Palestinians and 13 Israelis, an official told AFP.

"The prime minister instructed the relevant government bodies to examine a worldwide campaign to amend the international laws of war to adapt them to the spread of global terrorism," his office said in a statement.

It was also reported, Israel attacked Gaza last December in a bid to end eight years of relentless rocket fire by Palestinian militants. Some 1,400 Palestinians, including more than 900 civilians, were killed in the three-week war, according to Palestinian officials and human rights groups. Thirteen Israelis, including four civilians, also died.

Each side has rejected the war crimes allegations against it, The Associated Press reports.

News agencies also report, Israel's security cabinet met to discuss Israel's diplomatic and legal response to the Goldstone report and its endorsement by the UN Human Rights Council in Geneva. Netanyahu's office said in a statement his security cabinet instructed the Justice Ministry to form a committee to deal with the prospect of "legal proceedings abroad against the state of Israel or its citizens".

Israel 's Foreign Ministry and the Justice Ministry had raised the proposal for such a panel, to prepare a strategy for an informational, diplomatic and legal response to the report.

Netanyahu told Likud Knesset members on Monday that "the report is going to the UN [organs in New York]. We're going to see to it that it's vetoed."

He said he expects the report to be discussed by both the General Assembly and the Security Council, Ha'aretz reports.