Iran claims that Britain and America's intelligence services masterminded an attack on its Revolutionary Guard leadership. 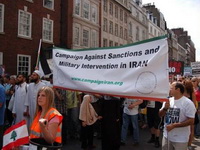 Besides, the head of the Revolutionary Guard, General Mohammad Ali Jafari, said his security officials had documents linking Britain and America to Jundullah, the militant group which claimed responsibility for the suicide bombing on Sunday.

Seven senior Guard officers were among at least 42 officials, bystanders and tribal leaders to have been killed.

"Behind this scene are the American and British intelligence apparatus, and there will have to be retaliatory measures to punish them," he said, Telegraph.co.uk reports.

Meanwhile, Britain’s foreign minister has categorically denied Britain had anything to do with the suicide attack on Iran’s Revolutionary Guards yesterday.

America and Pakistan have denied accusations they helped the Sunni rebel Jundollah movement carry out the bombing, which killed two of the Guard’s senior commanders and 40 others.

Several senior Iranian figures have said the Iranian security services had proof of foreign involvement, with President Ahmadinejad accusing Pakistan, but today he called instead on Islamabad for closer co-operation in dealing with terrorism, which he called their “common enemy”.

The Jundoullah group is based in the province of Sistan-Baluchistan on the Afghan frontier and it has been mounting increasingly spectacular attacks against the regime in Tehran for a number of years. Iran says group members are given safe haven in Pakistan and it is sending a delegation to demand the extradition of its leader, Abdolmalek Righi, euronews reports.

It was also reported, that the British government rejects “in the strongest terms” allegations that it aided rebels, a foreign office spokesperson told Reuters Monday.

The bombers struck early Sunday as the Guards prepared to bring regional Shiite and Sunni leaders together for a conference in Pishin to try to improve relations among the different communities, according to the Iranian news reports.

In one attack, a suicide bomber wearing a military uniform and an explosive belt entered a mosque where Guard commanders were organizing a reconciliation meeting, according to the semiofficial ILNA news service.

In the second attack, a car carrying a group of Guards members was bombed, state news agencies said.

Mustafa El-Labbad, director of the East Center for Regional and Strategic Studies in Cairo, said ethnic and sectarian divisions made the region particularly volatile. “There is the Baluchi versus Persian, and there is Sunni versus Shiite,” he said. “It also lies on the border with Pakistan, which is not totally secured — weapons can come through. So there is a very explosive blend there,” The New York Times reports.