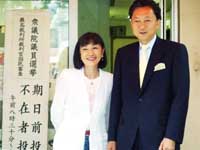 She has won an award for looking good — in her jeans. She's been called Japan's most colorful first lady for her cheerful character and quirky comments.

Miyuki Hatoyama, 66, won the annual prize given to celebrities who look best in denim, along with four Japanese musicians and a Taiwanese actor.

The first lady was recognized for "wearing jeans gracefully, with a bit of a revolutionary touch," according to the Japan Jeans Association, which represents denim importers and manufacturers.

"I have long wished to win the prize, as I'm a big fan of jeans," Hatoyama confessed.

Miyuki said she is trying to change her husband's rather stiff and professor-like appearance.

Hatoyama, originally an actress by profession, describes herself as "constantly curious" and a "life composer," who pursues a variety of interests, including a stylist, interior designer and cookbook author.

The Associated  Press  contributed  to  the  report.