British Prime Minister Gordon Brown urges leaders of all nations to take seriously the Climate Summit in Denmark in December as neglecting the global ecological challange may lead to irreparable effects. 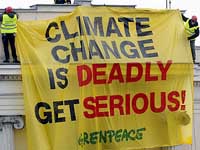 On the Major Economies Forum talks in London Brown said nations must make substantial new cuts in gas emissions by 2020 to meet targets proposed in The Stern Report, which predicted economic breakdown if climate change is not controlled.

Brown, who plans to attend the summit personally, called on fellow leaders to join him.

"There are now fewer than 50 days to set the course of the next few decades," Brown said. "We cannot afford to fail. If we fail now, we will pay a heavy price ... If we falter, the Earth will itself be at risk."

Few other world leaders have said they would go to the summit, though Danish Prime Minister Lars Loekke Rasmussen and U.N. Secretary-General Ban Ki-moon will likely attend.

Wealthy nations are seeking broad emissions cuts from all countries in the new pact.

Developing countries say industrialized nations should carry most of the burden, saying tough limits on their emissions would likely hamper their economic growth.

The British leader appealed to both the industrialized and developing world, saying they each could take advantage of business opportunities in creating new energy sources and improving energy efficiency.

Pressure has been mounting for the U.S. to finalize its position before the December summit. The Obama administration says it is tied to action by Congress, where climate bills are slowing moving forward.

Other nations including India, China, Brazil and Mexico have agreed to draw up national programs to slow the growth of greenhouse gas emissions, but have resisted making those limits binding and subject to international monitoring in a treaty.