The director-general of the U.N.'s nuclear watchdog agency ended Monday's meetings on the future of Iran's nuclear program on a note of optimism. 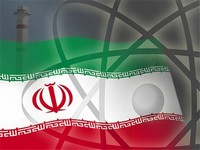 "We have had quite a constructive meeting," said Mohamed ElBaradei of the International Atomic Energy Agency. "We are off to a good start. Most of the technical issues have been discussed and we will continue tomorrow."

His comments came after officials from Tehran had huddled with representatives of the United States, Russia and France at the IAEA headquarters in Vienna.

It was also reported, Iran's negotiators have toughened their position on the nuclear programme, signalling that Tehran will refuse to go ahead with an agreement to hand over 75 per cent of its enriched uranium.

The move came as Iranian officials held talks with representatives of America, France and Russia in Vienna. An earlier meeting in Geneva on Oct 1 had yielded an agreement which some saw as a possible breakthrough.

Iran has amassed at least 1.4 tons of low-enriched uranium inside its underground plant in Natanz. If this was further enriched to weapons-grade level - a lengthy process - it would be enough for one nuclear weapon.

But Iran agreed to export 75 per cent of this stockpile to Russia and then France, where it would have been converted into fuel rods for use in a civilian research reactor in Tehran. This would have been a significant step towards containing Iran's nuclear ambitions, Telegraph.co.uk reports.

In the meantime, Iran opened its nuclear talks with the United States, Russia and France with veiled threats that it could back away from an agreement reached this month to ship more than three-quarters of its stockpile of nuclear fuel out of the country, unless the West accedes to Iranian demands for new fuel.

The threats, broadcast on Iranian television and in statements from the country’s atomic energy organization, may have simply been negotiating tactics ahead of negotiations that started in Vienna, the city that saw so many Cold War nuclear talks between the United States and the Soviet Union.

In the runup to the talks, President Obama’s aides said the talks, while advertised as a meeting of technical experts about a proposal to ship three-quarters of Iran’s nuclear fuel out of the country for conversion into a form that could be useful in a medical research reactor, would take on far more importance.

“By the end of these next two days,” one senior administration official in Washington said, “we’ll know if the Iranians are serious and whether we have time” to pursue further diplomacy with Iran without fearing that it could race ahead to produce a weapon, The New York Times reports.