As health care bill is still struggling among voters, analysts say Democrats are missing the chance to win over one key group — women — despite dramatic proposals to transform the way insurers treat them. 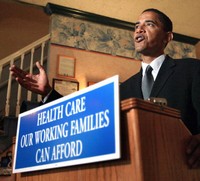 All of the bills in Congress add strong new protections for women’s health, but President Barack Obama and congressional Democrats rarely talk about them.

Maternity care would be guaranteed. Insurance companies could no longer charge higher premiums for women than men.

And insurers now allowed to label a Cesarean section or even domestic violence a pre-existing condition to deny coverage would be barred from the practice.

But proponents of health reform say women don’t know what’s in it in for them — and question why Democrats have been slow to target women with the same intensity that political campaigns pursue this key swing group , Politico reports.

Meanwhile, Politico quoted Mickey Edwards, former GOP congressman and now lecturer at Princeton University, as saying, "As Congress moves toward the endgame in its consideration of proposals to revamp American health care, leaders of both political parties have decided to march forward under banners that show that neither has any clear understanding of what the people who elected them actually want, what they will reward or what they will punish.

"Democrats remain convinced that despite more than a century of fervent opposition to tinkering with the health care system (exceptions were made nearly half a century ago for the elderly and the needy, but attempts to do more have been as strongly opposed since, just as they were before), the public has somehow changed its mind and will boot Democrats out of office unless they remake the health care system from top to bottom, penalize families by up to $1,500 a couple if they don’t sign on to the program and establish a new government bureaucracy to sell health insurance. The scientific term for such analysis is ‘delusion.’, " Politico reports.

It was also reported, reform won’t add patients to the system. It will put more people on insurance rolls – there’s a difference. When people need care, they seek it, whether they have insurance or not. The system handles those patients now. But because those people don’t pay for insurance, it increases coverage costs for the rest of Americans.

Many economists who specialize in medical issues agree that overutilization of health care is the biggest problem: Too many people get more care than they need, and that demand drives up costs. Insurance plans — especially those for bigger employers — offer comprehensive coverage, so there’s little need to avoid an extra test or procedure, as you might if you were personally footing the bill. When everyone gets all those tests, it forces up costs overall.

Caring for the unsinsured, too, increases costs. They often wait until they are seriously ill before getting care and then they get it in expensive emergency room and hospital settings. That cost – since they don’t have insurance – is borne by the providers, who pass it back to those of us with insurance, Detroit Free Press reports.