U.N. Commission to Report of Presidential Election's Fraud in Afghanistan

The U.N. commission investigating reports of fraud in Afghanistan's controversial presidential election is expected to release its highly-anticipated findings Monday. 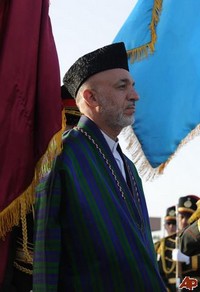 U.N. Commission to Report of Presidential Election's Fraud in Afghanistan

A spokesman for the independent panel said the report would be released late in the afternoon in Kabul (1230 UTC).

Preliminary results indicate President Hamid Karzai leads with 54 percent of the total. But the Electoral Complaints Commission (ECC) could throw out enough fraudulent ballots so that Mr. Karzai's total dips below 50 percent, most likely forcing a runoff with top challenger Abdullah Abdullah.

U.S. officials said Sunday President Barack Obama will not decide whether to send more troops to Afghanistan until the election is settled and the Afghan government is ready to work effectively with the United States, Voice of America reports.

It was also reported, initial results from August's election gave Mr Karzai 55% of the votes, with his nearest rival, Abdullah Abdullah, getting 28%.

But EU observers say that as many as one in four votes cast were suspicious.

The findings of The U.N. commission will be reported on Monday to the Independent Election Commission (IEC), which has the power to adjust the final tally.

However, the IEC - which is dominated by Mr Karzai's allies - is refusing to accept the result, sources involved in the process told the Associated Press, BBC News reports.

In the meantime, Obama is considering a request from his military commanders for another 40,000 troops to boost the more than 100,000 already in Afghanistan under US and NATO command.

Emanuel's words echoed Kerry, chairman of the Senate foreign relations committee and a close Obama ally, who met Karzai and Abdullah in Kabul at the weekend.

"It would be entirely irresponsible for the president of the United States to commit more troops to this country, when we don't even have an election finished and know who the president is and what kind of government we're working with," he told CNN.

Karzai's survival -- and that of his government -- depends on the continued support of the international community, which has poured billions of dollars in aid into the country since overthrowing the Taliban regime in 2001, AFP reports.