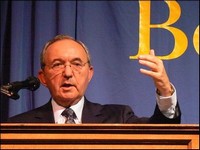 The Human Rights Council voted 25 to 6 Thursday to endorse the report and recommend that other U.N. bodies heed its recommendations.

The report recommends that Israel and authorities in the Gaza Strip prosecute fighters for alleged war crimes committed during last winter's Gaza war and, should that not happen within six months, for the U.N. Security Council pursue such prosecutions. The Human Rights Council resolution cites only Israel.

Goldstone, who agreed to lead the fact-finding mission only if he could investigate Hamas as well, said he was "saddened" by the resolution. "There is not a single phrase condemning Hamas as we have done in the report," Goldstone was quoted as saying by AFP, the French press agency, Jewish Telegraphic Agency reports.

In the meantime, the vote passed with 25 votes in favour, six against and 11 abstentions. The US voted against.

Neither Israel nor the Palestinians are among the 47 nations with seats on the human rights council, but both had worked hard to influence the outcome of the vote. The Israeli prime minister, Binyamin Netanyahu, wanted the council to reject the Goldstone report.

"Israel's only real crime is that it does not have an automatic majority in the UN," he said yesterday. "We hope that all responsible countries will + vote against that decision, which aids and encourages terror and strikes at peace," guardian.co.uk reports.

It was also reported, the resolution was passed mostly with developing countries in favor and the United States and five European countries opposing. Eleven mostly European and African countries abstained, while Britain, France and three other members of the 47-nation body declined to vote.

The Palestinians, through Egypt, Nigeria, Pakistan and Tunisia, had submitted the resolution to the council, which called for an endorsement of the Goldstone report that accuses Israel of committing war crimes and possible crimes against humanity during Operation Cast Lead.