Clinton Says U.S. and Russia Have to Move Beyond Cold War Mentality

Wednesday at Moscow State University Hillary Clinton has said it is essential for Russia to embrace basic human rights and freedoms, including the right of openly participating in the political process. 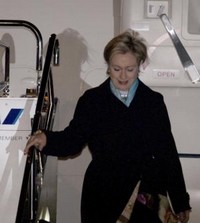 Clinton Says U.S. and Russia Have to Move Beyond Cold War Mentality

Clinton told a group of students that "citizens must be empowered" to determine what laws they will live under.

She said the freedom to take unpopular positions and "disagree with conventional wisdom" are the hallmarks of "an innovative society."

Clinton said it is those values that make the recent attacks on journalists and human rights activists in Russia a "great concern" for Washington. During an interview on a local radio station earlier Wednesday, Clinton discussed the death of investigative journalist Anna Politkovskaya, who was murdered back in 2006, Voice of America reports.

News agencies also report, Hillary Clinton admonished those in the U.S. and Russian governments who haven't moved beyond a Cold War mentality.

Clinton said such people are "living in the past" and aren't able to cooperate on issues such as missile defense because they "don't trust each other." She also called on the nations to find common ground, saying they "shouldn't end all cooperation" just because they can't agree on everything.

"Let's be smarter than our past," Clinton said, offering to bring a "new attitude bring to the relationship," CNN International reports.

It was also reported, Hillary Clinton said Wednesday the U.S. government had not yet made a final decision on the deployment of a missile defense system in eastern Europe, local media reported.

Clinton said she did not know a possible deadline for the United States to deploy the missile shield and the question should be answered by technical experts.

Clinton, who was on her first visit to Russia since taking office, also said Russia and the United States were no threat to each another, and the two countries should enhance bilateral cooperation, Xinhua reports.