Russian Foreign Minister Sergei Lavrov says, putting pressure on Iran and threatening sanctions over its nuclear programme would be counter-productive. 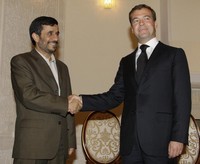 Speaking after negotiations in Moscow with Hillary Clinton, Mr Lavrov said every effort should be made to continue nuclear talks.

His comments appeared to fall short of the tougher commitment sought by Washington towards Iran.

But Mrs Clinton praised Russia for its help on the issue.

The US secretary of state, in Moscow at the end of a five-day European tour, told a joint news conference with Mr Lavrov that Russia had "been extremely co-operative in the work that we have done together" on Iran, BBC News reports. PRESS TV

Clinton praised Moscow for its 'extremely cooperative' behavior regarding Iran's nuclear issue, saying Washington would hold back from pressuring for nuclear sanctions against Tehran.

Despite the non-divergence of Iran's nuclear program from civilian purposes has been confirmed in several reports by the UN nuclear watchdog, Iran has so far come under three rounds of sanctions by the UN Security Council over its nuclear work.

"In the absence of significant progress and assurance that Iran is not pursuing nuclear weapons, we will be seeking to rally international opinion behind additional sanctions," she said.

"Russia has been extremely cooperative in the work that we have done together back at the United Nations general assembly," Reuters reports.

Reuters quoted Clinton as saying after talks with Foreign Minister Sergei Lavrov, "We did not ask for anything today. We reviewed the situation and where it stood, which I think was the appropriate timing for what this process entails" quoted Lavrov as saying, "Our position is that at this stage all efforts should be made to support the negotiating process. Sanctions and the threat of pressure in the current situation are counterproductive in our view."