North Korea test fires five short-range missiles off its east coast, declaring a "no sail" zone amid reports of the imminent arrival of a US warship at a South Korean port. 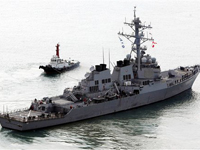 South Korea's Yonhap news agency reported Monday that the North has declared a "no sail" zone in the area for 10 days staring from October 10.

South Korean officials were not immediately available to comment on the reported missile launch — the first in about three months.

The report comes amid speculations that the aircraft carrier USS George Washington plans to dock in the South Korean port of Busan on Tuesday.

Amid tensions in the Korean peninsula, the leader in Pyongyang, Kim Jong-Il, recently told a visiting Chinese envoy that his country was willing to engage in bilateral and multilateral talks, hinting at its return to the six-party talks.

Pyongyang has also released two US journalists it had detained on espionage charges and allowed for the reunion of the families separated during the 1950s Korean War.

PRESS TV  contributed to the report.