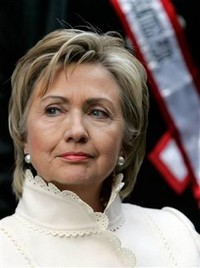 In an address to the Northern Ireland Assembly, with Irish Catholics to her left and British Protestants to her right, Clinton said they should take the next critical step in cooperation — running the police and justice system together — as the best way to defeat Irish Republican Army dissidents still plotting bloodshed. Protestant leaders are blocking the move.

Clinton told a hushed, packed chamber in Stormont Parliamentary Building that IRA dissidents were "looking to seize any opportunity to undermine the process and destabilize this government. Now they are watching this assembly for signs of uncertainty or internal disagreement."

"They want to derail your confidence. And though they are small in number, their thuggish tactics and destructive ambitions threaten the security of every family in Northern Ireland," she said. "Moving ahead together with the process will leave them stranded on the wrong side of history," The Associated Press reports.

It was also reported, DUP First Minister Peter Robinson welcomed the US Secretary of State saying that Northern Ireland had "come a long way".

"Of course there are difficulties, but we are committed to making it work," he said.

After discussions on policing and justice at Downing Street on Thursday, Mr McGuinness had said all sides were "on the cusp of agreement" on policing.

Mr Robinson said the recent negotiations with the prime minister had won "millions of pounds" more for the policing and justice budget.

However, Mr Robinson has made clear that finance is not the only issue, BBC News reports.

News agencies also report, the talks between Hillary Clinton and Northern Ireland's political leaders in Belfast come a day after one of Northern Ireland's deadliest paramilitary groups renounced violence and said its "armed struggle is over."

The Irish National Liberation Army said in a statement Sunday that uniting Northern Ireland with Ireland can be "best achieved through exclusively peaceful political struggle." The statement did not make clear when or if the group will hand over its weapons.

The INLA, a splinter group of the Irish Republican Army, made world headlines in 1979 by killing British Conservative Party lawmaker Airey Neave with a car bomb on the grounds of Parliament in London. Neave was an aide to Margaret Thatcher, who became prime minister five weeks later.

The head of the IRA's political wing Sinn Fein, Gerry Adams, said the INLA's decision will be welcomed if the group follows through on its pledge.

The Good Friday peace accords in 1998 brought an official end to violence between Catholic and Protestants in Northern Ireland, and the province is now governed by a power-sharing legislature representing all groups, Voice of America reports.