Tuesday U.S. administration officials said that they are ready to take swift and substantial action against Iran if it ignores current diplomatic efforts to stop its alleged nuclear weapons program. 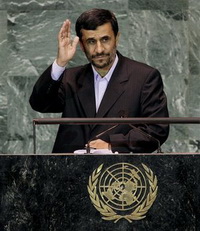 At a Senate Banking Committee hearing, lawmakers expressed skepticism that Iran would negotiate in good faith. They said they would not wait long before acting on legislation to impose tough new sanctions on the Tehran government.

Banking Committee Chairman Christopher Dodd, D-Conn., said he planned to move forward this month on a proposal to extend restrictions on financial transactions, impose new sanctions on oil and gas pipelines and tankers, restrict exports of certain refined petroleum products to Iran and impose a broad ban on imports from Iran, The Associated Press reports.

AFP quoted Treasury Undersecretary Stuart Levey as saying, "This administration has demonstrated that it is committed to a diplomatic resolution of the international community's issues with Iran."

"The world is now united in looking to Iran for a response. If Iran does not live up to its obligations in this process, it alone will bear the responsibility for that outcome," he said.

"Under these circumstances, the United States would be obliged to turn to strengthened sanctions," said Levey, who as undersecretary for terrorism and financial intelligence oversees the department's efforts to staunch the flow of funds to international terrorists and weapons of mass destruction proliferators.

"We are intensifying work with our allies and other partners to ensure that, if we must go down this path, we will do so with as much international support as possible," said Levey, AFP reports.

In the meantime, in Geneva on October 1 Iran agreed with six world powers -- the United States, Russia, China, Britain, France and Germany -- to allow U.N. International Atomic Energy Agency (IAEA) inspectors access to the site. Follow-up talks are due in late October.

"We have put our effort on research and development of new machines in the past two or three months so that we would be able to produce machines with high efficiency and completely indigenous," Ali Akbar Salehi, the head of Iran's Atomic Energy Organization, was quoted as saying by the newspaper Kayhan on Tuesday.

The West suspects the Islamic state is covertly seeking to develop nuclear weapons. Iran denies this but has refused to curb the program or allow unfettered IAEA inspections needed to verify it is for peaceful purposes only, Reuters reports.