African Cardinal Has No Color Prejudices

A prominent African cardinal does not exclude the next pope being black, particularly after the election of President Barack Obama. 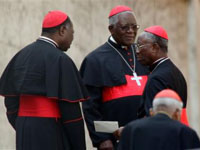 African Cardinal Has No Color Prejudices

Cardinal Peter Kodwo Appiah Turkson of Ghana is playing an important role in guiding a three-week meeting at the Vatican on the challenges of the Catholic Church in Africa.

At a news conference Monday, Turkson was asked whether he thought the time was right for a black pope, especially in light of Obama's election.

"Why not?" Turkson replied. He argued that every man who agrees to be ordained a priest has to be willing to be a pope, and is given training along the way as bishop and cardinal. "All of that is part of the package."

He also noted that former U.N. Secretary-General Kofi Annan was from Ghana.

"He had problems, but he still did it," Turkson said. "And now it is Obama of the United States. And if by divine providence — because the church belongs to God — if God would wish to see a black man also as pope, thanks be to God!"

Speculation about the possibility of a pope from the developing world has swirled for years, as that is where the Catholic Church is growing most: In Africa, between 1978 and 2007, the number of Catholics grew from 55 million to 146 million. By contrast, Catholic communities in Europe are in decline.

Whether the European-heavy College of Cardinals will look outside Europe for Benedict's successor is an open question. Benedict enjoys good health at 82, and there are no signs the job will become open soon.