Padang to be Rebuilt under New Standards

After the tragical devastation in the earthquake-shattered Indonesian city of Padang the mayor of the city intends to control reconstruction work with particular strictness. 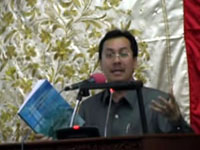 Padang to be Rebuilt under New Standards

In Padang, a city of 900,000 people which bore the brunt Wednesday's deadly 7.6 magnitude quake, thousands of buildings collapsed trapping people under piles of masonry. Thousands of people may have been killed.

Many public buildings were completely destroyed, raising questions about construction standards in a quake-prone area and government supervision.

"Of the collapsed buildings that need rebuilding, the construction must be up to standard," said Mayor Fauzi Bahar. "We have to have good foundations, good quality iron and steel. We cannot let even one be built below standard. We must be more selective with our building permits."

Padang lies on one of the most active faultlines in the world, but a geologist said the city had been ill-prepared and remained at risk of being wiped out in the next decade by a more powerful earthquake.

Mayor Fauzi said that the city needed to focus on a quick recovery to get back on its feet.

"First, we have to get children back to school. People have to go back to their offices," he said.

The mayor said that markets had reopened on Saturday, so people could get basics like fish, vegetables and their daily needs.

According to data from Indonesia's disaster agency, about 180,000 homes and 20,000 buildings in West Sumatra had been damaged in the quake.

West Sumatra's governor told reporters he would issue a new law to ensure all buildings in the province were built to withstand a magnitude 8 quake, according to Reuters' report.