Thursday General Stanley McChrystal warned the conflict in Afghanistan is deteriorating in some ways and will "not remain winnable indefinitely." 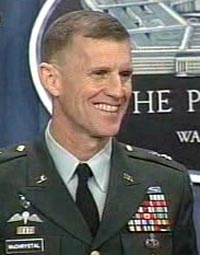 The top US military commander in the country added that forces would be in a much stronger position once US President Barack Obama decides on troop levels in Afghanistan, while saying that it would be wrong to rush to make a decision.

"The situation is serious and I choose that word very, very carefully ... neither success nor failure can be taken for granted," said McChrystal, who has asked for up to 40,000 more troops to fight the Taliban.

"The situation is in some ways deteriorating but not in all ways," he told the International Institute for Strategic Studies (IISS) think-tank in London, AFP reports.

It was also reported, in his first speech since submitting a report calling for more troops, Gen Stanley McChrystal also said the operation had been "under-resourced".

The White House has said that a review of its Afghan plans may take weeks.

The general warned that forces would have to adopt an entirely new approach when tackling the insurgency.

"We are going to have to do things dramatically differently, even uncomfortably differently in the way we operate." BBC News reports.

In the meantime, President Barack Obama is confronting a split among his closest advisers on Afghanistan, reflecting divisions in his own party over whether to send in thousands more U.S. troops and complicating his efforts to adopt a war policy he can sell to a public grown weary of the 8-year-old conflict.

With top military commanders and congressional Republicans pushing for a troop increase, Obama pressed key members of his national security team Wednesday for their views during an intense, three-hour session in a packed White House Situation Room.

The meeting didn't include specific discussions of troop levels, a senior administration official said. At its conclusion, Obama reminded the crowd that he hadn't reached a decision and that his war council should return twice next week with more details and ideas, the official said. The official spoke on condition of anonymity to discuss the private deliberations, The Associated Press reports.