In Germany tough negotiations are held as Chancellor Angela Merkel and her partners hammer out a deal on a new government. The FDP leader Guido Westerwelle is expected to be given foreign affairs, but hopes that his party may get the economic and justice ministries may be thwarted by Merkel loyalists already in place. 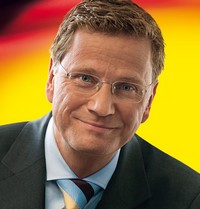 The Chancellor hopes to unveil her new line-up soon.

"On the 9th of November, the anniversary of the fall of the Berlin Wall, I would like to welcome European leaders and other guests with a new government," she said, euronews reports.

It was also reported, Mr. Westerwelle will be named vice chancellor and foreign minister in the new government, his reward for steering his free-market, pro-business party to its best result yet in a federal election.

To judge by Sunday's election, Mr. Westerwelle's Free Democrats emerged as the biggest winners of the day, watching their share of the vote rise by the largest amount of any party, to 14.6 percent, an increase of 4.7 percentage points over the previous election in 2005. The party rose even as Mrs. Merkel’s conservative bloc lost ground slightly with voters, pulling in just a third of the vote.

Mr. Westerwelle met with Mrs. Merkel on Monday as part of negotiations to form the anticipated new center-right government, a partnership that the chancellor had told voters she needed in order to repair the country’s economy. In a news conference, Mr. Westerwelle refused to discuss the division of top positions, including his own, saying, “It is about the right policies for our country and certainly not about these posts,” The New York Times reports.

In the meantime, Guido Westerwelle and his gay partner are Germany's new "power couple" — at least according to the nation's leading daily, which splashed a photo of the pair hugging on election night on the front-page above the fold in Tuesday's paper.

"His man makes him so strong," Bild wrote about Westerwelle, declaring that his 42-year-old partner Michael Mronz was not only his most important adviser during the campaign, but also "gives him security and ... supports him when he suffers a setback."

Despite eight years as leader of the pro-business Free Democrats, Westerwelle's homosexuality has generated relatively little discussion. But with his party set to become kingmaker to Chancellor Merkel's conservatives and him foreign minister, it has been thrust into the spotlight.

Westerwelle, who has led the Free Democrats since 2001, also spoke out for stronger civil rights during the election campaign and has criticized in the past that German law does not give complete adoption rights to gay couples, The Associated Press reports.