The Secret Service is investigating the origins of a poll that appeared on Facebook that wondered  whether President Obama should be killed. 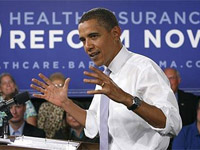 Posted over the weekend, the poll was removed by Facebook after the Secret Service received a tip and contacted the company, which was not aware of the survey.

As the health care debate intensified over the summer, experts tracking hate groups expressed concern over what they described as violent rhetoric and "a genuine backlash" against the president.

According to a spokesman for Facebook, the poll was created by an independent person using an add-on application.

Actually, the hooligan or group of hooligans may be racists, who simply do not like Obama just because of the color of his skin. And they use the health care debate to fuel the hatred.

Anyway, the Secret Service will be reaching out to the person who developed and posted the poll to determine intent.

ABC News  contributed to the report.