Candidate For 2016 Olympics To Be Declared This Friday

Brazil expects Rio de Janeiro to win its bid for the 2016 Olympics, though there are three more candidates. 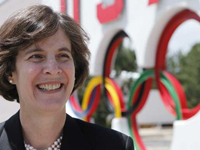 Candidate For 2016 Olympics To Be Declared This Friday

Brazilian president Luiz Inacio Lula da Silva  will travel to the Danish capital to lobby for Rio ahead of Friday's vote by the International Olympic Committee. Chicago, Tokyo and Madrid are also in the running, and President Barack Obama will be in Copenhagen to push for his adopted hometown.

"This is a fight," Silva said on his weekly radio program. "And if we don't win, we'll have to prepare for another one. But I think we're going to return from Copenhagen with a victory."

Silva said the Brazil deserves the Olympics because South America has never hosted the games.

"For the other nations, it would just be one more Olympics," said Silva, a day after attending a summit of South American and African leaders in Venezuela.

The IOC will vote by secret ballot over several rounds. Rio and Chicago appear to be the main contenders but Madrid and Tokyo are also in the running.

"I think Brazil will win because we have the best proposal," Silva said. "We have the commitment from the city, the state and the federal government."

Silva will travel to Copenhagen for some last-minute lobbying, and his comments Monday came as officials announced that Obama will be going to Denmark.

"I've sent a letter to every voting member of the IOC and I hope they will have the understanding that South America, with 180 million young people, can pull off the Olympics," Silva said.

Rio gained IOC praise for having strong public support, a stable economy and experience from successfully hosting the Pan American Games in 2007. Rio also is hoping to gain points with its fun-loving people and unrivaled natural beauty, with mountains covered with thick green jungle towering above gorgeous beaches.

Although Rio received the least direct criticism in the IOC's report, there is one major issue that puts the city behind its three competitors — security.

The IOC noted that Chicago, Madrid and Tokyo are "capable of providing the level of security and safety required for the games," but made no such mention about Rio. The report said officials have been successful reducing crime in Rio recently, but news about crime in Brazil's second-largest city remains a common occurrence.