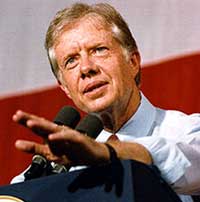 "I think that an overwhelming proportion of the intensely demonstrated animosity toward President Barack Obama is based on the fact that he is a black man, he's African-American," Carter, 84, told NBC television.

"I live in the South, and I have seen the South come a long way," Carter added.

"But that racism inclination still exists, and I think it has bubbled up to the surface because of a belief among many white people, not just in the South but across the country, that African-Americans are not qualified to lead this great country."

"It is an abominable circumstance, and grieves me and concerns me deeply," added Carter, AFP reports.

The House returns to work Wednesday with nerves still raw over the bitterly divided vote Tuesday to rebuke Wilson, R-S.C., for shouting "You lie" at President Barack Obama during last week's nationally televised speech to Congress.

Just after the vote, Rep. Louie Gohmert, R-Texas, argued on the House floor that the president actually had insulted Congress during his speech, instead of the other way around.

"He comes in here talking about a lie. ... He says we're making wild claims," Gohmert said of Obama's allegations that Republicans were mischaracterizing Democrats' health care bills. "That's no way to act when you're invited into somebody else's house," The Associated Press reports.