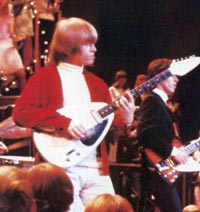 Jones, a founding member of the rock band, was 27 when he was found dead at the bottom of a swimming pool at his home in southern England 40 years ago, reports Reuters.

Brian Jones' body was found in the swimming pool after a party at his home in Cotchford Farm, East Sussex in July 1969. He was 27.

An inquest returned a verdict of death by misadventure, despite post mortem results showing he had not taken illegal drugs and had only consumed the alcoholic equivalent of three and a half pints of beer.

One of the most popular conspiracy theories that followed was that Jones was murdered by his builder, Frank Thorogood.

The theory gained credence after Thorogood allegedly confessed to the killing before his death in 1993. The storyline formed the basis of the 2005 film "Stoned," CNN informs.

In the 40 years since his death, many fans have speculated he was murdered. In a November 2008 article published in the Daily Mail, Scott Jones -- a journalist who is of no relation -- wrote, "I'm convinced Brian Jones' death was not fully investigated. The only question that remains is why?" In an interview with Janet Lawson, the girlfriend of Stones tour manager Tom Keylock, for the article before her death, she contradicted her original statement and called her original statement, "a pack of lies ... total rubbish."

A popular conspiracy theory suggests that the musician was murdered by his builder, Frank Thorogood, who allegedly confessed to the killing before his own death in 1993. That storyline later formed the basis of the 2005 film, 'Stoned.' A police spokesman confirmed they were in receipt of documents connected with Jones' death, but a full investigation is not imminent. "These papers will be examined by Sussex Police, but it is too early to comment at this time as to what the outcome will be," he said, reports Spinner.