US Secretary of State Hillary Clinton on Thursday arrived in Monrovia, the capital of Liberia, on the sixth leg of a tour of seven African nations. 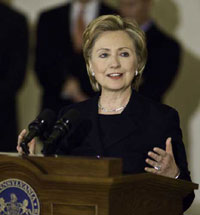 Clinton 's Air Force 2 flew in from Abuja in Nigeria and arrived shortly after 11.00am (11.00GMT), Independent Online reports.

While in Liberia, Mrs. Clinton is to focus on Liberia's recovery from civil war, and its strides toward good governance and democracy building. While military ties are not necessarily on the agenda, Mrs. Clinton will almost certainly also discuss America's continuing military relationship with Liberia, The Christian Science Monitor reports.

Earlier, Clinton offered U.S. support for Liberia's president Ellen Johnson-Sirleaf, who is Africa's first democratically elected female leader. Sirleaf has been targeted along with others by a truth and reconciliation commission examining the aftermath of back-to-back civil wars from 1989 to 2003.

At a joint news conference with Sirleaf, Clinton reeled off a list of Liberia's accomplishments from infrastructure development to financial policy and said the U.S. "officially supports what this government is doing."

"We have looked at the entire record that President Sirleaf brings to office, her performance in office, the accomplishments of the government she leads," Clinton said. "And we are supportive and will continue to be so because we think that Liberia is on the right track," The Associated Press reports.