Michal Jackson bigger than ever after his death

Michael Jackson’s death was a shock almost for everyone, but especially miserable now feels his family. 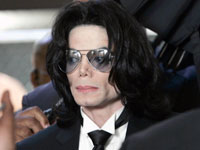 Michal Jackson bigger than ever after his death

On Sunday night at the end of the BET Award, Michael’s sister Janet spoke publicly for the first time about the death of her beloved older brother

Clad all in white, a visibly distraught Janet remained strong as she fought back tears while addressing the audience.

"My entire family wanted to be here tonight but it was too painful," she told the crowd — which included her father Joe Jackson — which cheered and stood on its feet. She then said her comments would be brief.

After Michael’s death some of the biggest stars on the planet turned back into his gushing fans at the BET Awards, donning single gloves, swapping stories about their idol and singing The King of Pop's standards. One person who perhaps knew him best, though, brought the night into perspective: his sister.

"To you, Michael is an icon," a somber Janet Jackson told the crowd at the end of Sunday's show. "To us, Michael is family and he will forever live in all of our hearts."

It was a stirring emotional climax for a telecast that was completely revamped to recognize the legacy of Jackson, who died Thursday at age 50. For the most part, it was a joyous wake.

"He's the man who made it possible for me to be on the stage; I love you and I miss you," said Ne-Yo, who sang one of Jackson's most sensual songs, "Lady In My Life," ABC news reports.

In the mean time Michael’s father Joe Jackson, told CNN that he had "a lot of concerns" over the final moments of his son's life, especially the circumstances and people surrounding the incident. He also stressed that his and his family's primary priority was the care of Michael's three children.

"Our family thanks all of you around the world," said a representative whom Jackson asked to read a statement, which was different from the statement the family issued on Saturday. "Michael's children are our first priority." The statement went on to express that Michael's parents have declared their sole legal authority and responsibility to take care of the three kids, and that only lawyer L. Londell McMillan has the authority to speak for the family.

Joe Jackson expressed remorse over Jackson's posthumous popularity. "I wish the world had recognized him when he was living," he said. "Right now he's bigger than ever, but I wish he was here to see all this", MTV.com reports.

Hotspots and Incidents
Ukraine uses HIMARS systems for the first time
17:20
Zelensky compares NATO to policy to old turnstiles in the Kyiv subway
16:45
NATO officially names Russia the main threat to its security
15:44
Video: Russia did not strike Amstor shopping centre in Kremenchuk
15:05
German Chancellor Scholz grins to question of security guarantees for Ukraine
13:46
Russia tells UN for how long special operation in Ukraine will last
20:00
USA bans Russian gold
19:56
USA sanctions Russian defence officials and TV presenter
18:56
Expert names the two reasons why Zelensky wants to end the conflict before winter
18:46
USA unveils plan for post-Putin Russia to collapse into smaller states
18:11
Russia published images of the decision-making centres in the US and Europe
РусскийDeutschFrançaisPortuguese