Who is the designer for Sarah Palin's glasses? 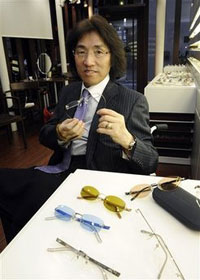 Who is the designer for Sarah Palin's glasses?

"She is very good-looking. She would look good in any glasses," Kawasaki said Wednesday of Palin at a Tokyo store for Masunaga Optical Manufacturing Co., which makes the clear-rim MP-704.

The glasses, made of super-light and non-allergenic metal called titanium, has become all the rage for its sudden high-profile visibility atop the 44-year-old Alaskan governor's nose.

The company, based in Fukui Prefecture (state), central Japan, usually makes 12,000 MP-704 glasses in a year and a half. Thanks to Palin, it has already received 9,000 global orders, mostly from the U.S., in the last 10 days, says Masunaga store chief Akira Nagayama.

According to Nagayama, the glasses don't need any screws and instead use a thin metal strip similar to a paper clip to attach the lens to the frame, offering a clearer view for the wearer.

Kawasaki, 59, an engineering professor at Osaka University, also designs arty syringes, artificial hearts, kitchen sponges and wheelchairs - including his own that he uses after a traffic accident 30 years ago.

He believes his glasses are becoming a hit because people appreciate how scientifically and ergonomically they are designed so wearers barely feel their presence.

Kawasaki said he shares what he sees as some common political sentiments with Palin.

"I am quite right-wing," said Kawasaki, a long-haired soft-spoken man proudly wearing the updated version of the MP-704, the MP-705. "I am a nationalist in the sense I believe in the Japanese aesthetic."

But he also can't help feeling an affinity with Obama.

Kawasaki's former students are among the residents of Fukui, which has a city that happens to be called Obama. And they have started a community movement supporting Obama, although none of them can vote in the Nov. 4 U.S. election.

An award-winning designer who has contributed to the permanent collection at the Museum of Modern Art in New York, Kawasaki has seen his glasses on celebrities before, including former Secretary of State Colin Powell and actress Whoopi Goldberg.

But he has never gotten quite the stunning reception as he has had this time around with Palin.

"I want to say, 'Thank you,' to Ms. Palin," he said with a smile. "I want people to realize how fantastic Made in Japan technology can be."

Kawasaki, who believes design offers solutions to social problems, not just trendy appearances, is careful to add he isn't taking sides in the presidential race.

"Whether it becomes Mr. Obama or Mr. McCain, I want to ask him to build peace in the international order," he said.