Another Bruce Ivins may lurk in biodefense laboratory anywhere in America

There could be another Bruce Ivins lurking in a biodefense laboratory anywhere in America. 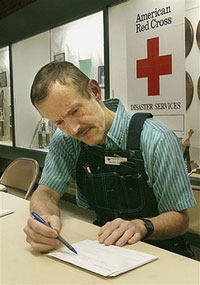 Another Bruce Ivins may lurk in biodefense laboratory anywhere in America

These research facilities have expanded so quickly since the anthrax attacks in 2001 that the U.S. government cannot keep close tabs on the sites or their thousands of scientists. At most labs, security procedures are designed to prevent accidents, not weed out people like Ivins who work with deadly toxins while privately battling dark psychological problems.

Military laboratories have policies intended to spot mentally troubled scientists. But those policies apparently weren't enough to flag Ivins, with his reported history of homicidal and sociopathic behavior. He killed himself Tuesday, knowing prosecutors were about to charge him with murder.

At private and academic labs, the policies are even more lax.

An estimated 14,000 scientists are cleared by the government to work with the most dangerous substances known as "select agents." Nearly all of them have access to potential biological weapons.

There is little to stop one of them, especially an investigator in charge of his own lab, from smuggling out an anthrax spore, for example, on a cotton swab.

"You cannot persuade me there are not more disturbed or disgruntled persons with a political agenda in such a large group," Richard Ebright, a chemistry professor at Rutgers University who has closely followed the lab expansion, said in an interview Sunday.

Ebright said President George W. Bush's response to the 2001 anthrax cases increased the risk of further attack. While a biodefense program is needed, he said the president should have reduced - not increased - the number of scientists with access to potential biological weapons. Yet the administration pumped billions of dollars into the program, swelling the number of labs to nearly 1,400.

Rep. Elijah Cummings, a Democratic member of the House Armed Services Committee, said the Ivins case revealed a potential security flaw in the biological defense system. He said it would be irresponsible for Congress not to investigate.

"People given these kinds of responsibilities, with this kind of power at their fingertips, we have to make sure that they are not likely to do harm to others or misuse that authority - be it intentionally or be it because of some mental problem," he said. "These kinds of situations cry out for reexamination of our standards."

In 2003, as a result of the anthrax attacks, the FBI began conducting security risk assessments. Ivins would have filled out a form inquiring, among things whether he had ever "been adjudicated as a mental defective or been committed to any mental institution." There is no indication Ivins fell into either category.

A senior FBI official, speaking on condition of anonymity because he was not authorized to speak about the ongoing investigation, confirmed that Ivins' mental health problems probably would not have been flagged by the standard FBI review.

Yet Ivins had attempted to poison people as far back as 2000 and his therapist said she was "scared to death" of him, according to court testimony that emerged Saturday. Social worker Jean Duley testified at a court hearing in Frederick, Maryland, on July 24 in a successful bid for a protective order from Ivins that he "actually attempted to murder several other people."

In 2005, the Pentagon ordered new "biosurety" safeguards requiring workers such as Ivins to be "mentally alert, mentally and emotionally stable." The program was meant to ferret out workers with mental problems and those who attempted or threatened suicide.

Kathleen Carr, a former Army medical research official who helped implement the biosurety program at Fort Detrick, said it was up to Ivins to self-report any problems that might disqualify him from his work. Carr, a former colleague of Ivins, acknowledged that workers can ignore the self-reporting rule.

She said she never saw signs of Ivins' mental illness, even as recently as April.

"He seemed his usual collegial self," she said.

Dr. W. Russell Byrne, who worked with Ivins before retiring four years ago, said a mental illness could have escaped detection during the annual physicals required of those working with biosafety level 3 pathogens such as anthrax, but "hiding it from your co-workers - that would have been very, very difficult."

For the thousands of scientists working outside the Pentagon system, the rules are even more lax. Federal law restricts access to biological agents if scientists have been judged mentally defective or committed to a mental institution. Felons, fugitives, drug users, illegal immigrants and those from countries supporting terrorism are also barred.

These limitations would not exclude a white supremacist, a radical Islamist or someone with homicidal tendencies who was not declared mentally ill, indicted or convicted of a felony.

Rep. Bart Stupak, who has been investigating biodefense lab safety, said much of the expansion has been at university facilities that have students from many countries.

"Universities are pretty sloppy. It's an academic setting, not a security setting," said Stupak, a Democrat who heads the investigative panel of the House Energy and Commerce Committee.

Jonathan B. Tucker, a Washington expert on biological weapons, said stricter rules will come with a price.

"You're basically going to scare off any scientist from wanting to work in this field if it becomes even more stringent," he said. "It is a balance. It's a policy decision about how stringent we want to be."

Sen. Susan Collins, a Republican member of the Armed Services Committee, said Congress must re-examine that balance. Federal regulations shouldn't discourage scientists from working in government labs, she said, but someone as apparently troubled as Ivins should not "have access to some of the most lethal substances imaginable."

Edward Hammond, who has followed biolab safety since 1999 as head of the Sunshine Project, said the culture at bioweapons laboratories works against spotting a senior scientist who wants to do harm.

"The principal investigators rule the roost in their labs," Hammond said. "One of the complaints by people who work in safety and security is, they can't get the time of day from people running the labs."

Security questions "are viewed as deeply offensive by a lot of scientists, as if their patriotism is being questioned," Hammond said.

The Government Accountability Office reported last fall that no federal agency is responsible for determining the risks associated with the proliferation of labs.

"Though several agencies have a need to know, no one agency knows the number and location of these labs in the United States," according to the investigative arm of Congress.

Ivins took a fatal dose of acetaminophen, the active drug in Tylenol, as federal authorities monitored his movements and prepared to charge him with the murder of five people who died from anthrax poisoning in the weeks after the Sept. 11, 2001 terror attacks.