The Usedom beach on the German-Polish border has become the unlikely place for a fresh battle between the countries - a nudist war! 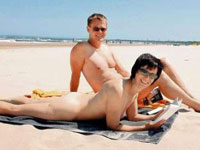 On the one side white bottoms burn in the sun. On the other side conservative swimming trunk-wearers turn up their noses at the naked beachgoers.

Now a heated argument has broken out between the exhibitionist Germans and the prudish Poles.

For the last fifty years sun-loving Germans have been preserving their naturist traditions from Ahlbeck (Mecklenburg-Vorpommern) to Swinemünde.

But following the Schengen agreement in December 2007 the fence separating the German and Polish parts of the beach was removed.

Now German nudists are battling the Poles for their freedom to prance around naked in the sun.

"It's ridiculous" said Swinemündes minister Edward Zajac. And Anja (28) from Poland, who clearly think the German nudists are real swines, said: "It's horrible. We would never bathe naked - we are Catholic."