By Anastasia Tomazhenkova: Amsterdam city council ordered escort services to obtain licenses within 6 weeks or shut down. It is one of the latest steps to tighten controls on legal prostitution. 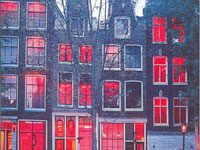 The order is part of a campaign to combat money laundering, human trafficking and abuse in the sex industry. It was legalized in 2000.

To obtain a license, escort agencies must have a fixed address and telephone number, and must guarantee that prostitutes are healthy and work in safe conditions, the city said in a statement.

In the past 18 months, the city has purchased and shut down around a third of the windows in its famed Red Light District, where scantily clad women have beckoned customers for hundreds of years. Many were reopened last month as shops for young fashion designers.

The city also closed its most famous high-end brothel, Yab Yum, and has ordered the closure of several sex theaters.

By some estimates, nearly a third of tourists who visit Amsterdam visit the Red Light District - most just for a peep.

Council spokesman Edwin Oppedijk said the city estimates 120 escort agencies - which until now have escaped vetting - will be affected by the licensing order.

Around 1,200 prostitutes who operate as one-person businesses in the city won't be affected.

Differentiating between legitimate escort services and pimps who are exploiting women can be difficult, Oppedijk acknowledged.

"The intention is not to shut them down, but if they are involved in illegal practices, that can be the result," he said.

So far only a handful of escort services have requested a license, but the city has information from the country's tax authorities on about 60 agencies.

It was unclear how the new ordinance would be enforced.

The term "Red Light District" was first recorded in the United States in 1894, in an article in The Sentinel, a newspaper in Milwaukee. Other mentions from the 1890s are numerous, and located all over the United States.