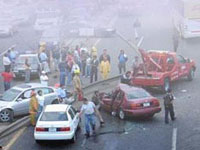 By Anastasia Tomazhenkova: Nine cars and trucks crashed into each other on a fog-choked rural highway south of the Egyptian capital of Cairo. At least 29 people dead, 12 injured.

The line of cars collided due to heavy fog and their high rate of speed, some 100 kilometers (60 miles) south of the Cairo, temporarily blocking the main agricultural road leading to Egypt's southern provinces.

The injured were taken to a nearby hospital for treatment.

Road accidents are very common in Egypt due to bad roads, poor enforcement of traffic laws, and an overall reckless approach to driving that involves a great deal of moving into the oncoming lane to pass slower vehicles.