By Abastasia Tomazhenkova: Police reported that Pablo Picasso's paintings were thieved. Two painter's works worth millions of dollars were stolen from a Swiss exhibition. 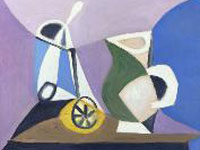 The painting were stolen Wednesday evening after closing time at the Seedamm-Kulturzentrum in the small town of Pfaeffikon, near Zurich. Police have yet to catch the culprits, they said in a statement.

It was unclear how the burglars entered the culture center, but they set off a security alarm when leaving the building. Police said they are investigating whether the burglars locked themselves in the building before it closed.

The two oil paintings, entitled "Tete de cheval" ("Head of horse") and "Verre et pichet" ("Glass and pitcher"), were on loan from the Sprengel Museum in Hannover, Germany.

The German museum has promised an award for those assisting in the arrest of the burglars and recovery of the paintings. The Sprengel declined to say how much the award was worth.

The Swiss exhibition is made up entirely of works loaned to the museum. It includes 20 original Picasso paintings and 170 other works by him, including etchings, linoleum cuts and prints.

One of the most recognized figures in 20th century art, Spanish painter Pablo Picasso is best known as the co-founder of cubism.