Why did he climb into washing machine?

By Anastasia Tomazhenkova: A 4-year-old boy got stuck and firefighters had to use a metal cutter to get him out. Why did he climb into his family's top-loading washing machine? 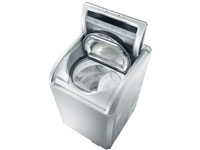 Why did he climb into washing machine?

Dover Fire Capt. Mike Mossor reported that Donovan Hasseman was wedged up against the agitator with a knee folded against his chest, while the machine was empty and not running Sunday night.

Firefighters responding to an emergency call from the boy's mother tried to help him wriggle out, but he could not move, Mossor said. The owner of an appliance store was then called in for advice on how to take the washer apart.

The fire department wound up using its hydraulic "jaws-of-life" tool normally used to remove crash victims from wrecked vehicles to cut through the machine's walls and plastic tub.

The child cried and screamed at times while stuck but was calm once he was freed, Mossor said.

The boy who was not hurt.

A hospital looked him over then released him, and he was given a stuffed bear which the family has named Agitator.